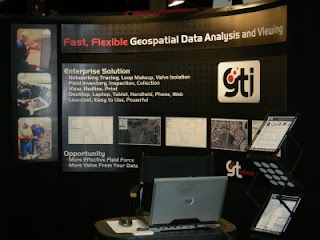 With Version 8.0 of GTViewer, GTI's Logos and Corporate Image have been upgraded.

The photo above shows our booth at DistribuTECH 2009 in San Diego.
Posted by GTViewer - Joey Rogers at 10:23 AM No comments:

- CHG - #5714 - Element Count display on status bar has been changed to show displayed elements instead of cached elements. This change allows better tuning of display filters.

- FIX - #5715 - Problem introduced with #5701 that prevented the Count Highlighted elements for getting linear elements.

- NEW - #5716 - CopyPasteMode added to Additional Properties so that selected elements are unselected when data is copied.

- NEW - #5719 - If the DM Tooltip Separator is set to an empty string, there will be no separator added between DM tooltips when multiple tooltips are present at one location.

- NEW - #5723 - UDLS Flag=4 has been added to support centering symbols in the middle of a line versus mode 3's centering a symbol within each segment of a line.

Posted by GTViewer - Joey Rogers at 11:37 AM No comments:

- FIX - #5702 - After Highlighted elements are converted to Session Graphics, a RefreshView is now performed to flush the element cache.

- FIX - #5708 - Fixed Scale text and symbols did not appear the same size on the screen and prints.

- FIX - #5690 - Feature Count highlight sometimes did not use the correct weight for the highlighted segments.

- CHG - #5692 - All Stroking angles for Ellipse, Circle, and Arc elements have been lowered to 5 degrees.

- NEW - #5697 - GetGisInfoFromFilterId method has been added.

- FIX - #5684 - Open File button on the Extract dialog would fail openning file if there were spaces in the filename.


Posted by GTViewer - Joey Rogers at 4:49 PM No comments: