GTWeb 5.0 - Use with your favorite Browser

The new version of GTWeb now provides a client-less mode of operation that makes it browser independent. Today, the three most common browsers are Internet Explorer, FireFox, and Opera. So, if you are fond of particular browser, if you are forced to use a specific browser due to corporate directives, or if your web app is for the public browser selection is out of your control, the new GTWeb client-less mode of operation addresses these needs.

Previous screenshots of GTWeb 5.0 have been with Internet Explorer 6.0, so the ones below are all using different browsers. 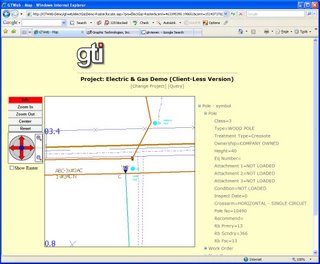 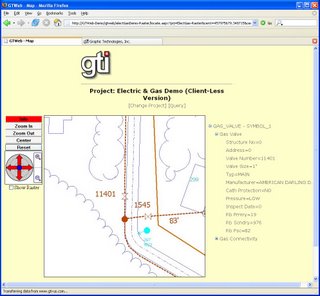 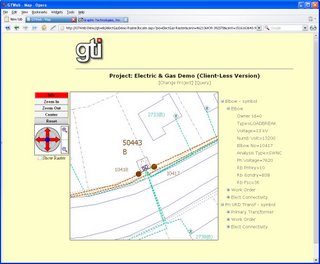 Posted by GTViewer - Joey Rogers at 1:16 PM No comments:

A Press Release for GTWeb 5.0 can be found on GIS Cafe.
Posted by GTViewer - Joey Rogers at 11:38 AM No comments:

- CHG - GPS dialog was changed to have a Track GPS in View option and a Show Indicator option as well as an Indicator Type. The Track GPS option has also been added to the toolbar.

- FIX - Connectivity Query and Offset Query would not find a record if it were the first record in the file. Problem introduced with very large .gtx file support was enhanced (4.0.0.16).

Posted by GTViewer - Joey Rogers at 4:35 PM No comments:

Version 5.0.0.4 of GTData will include a new utility called GTFilterImp.

This utility will import the customizable settings (including display status, minimum display threshold, maximum display threshold, and filter flags) from one Filter Definition File (.flt) into another. Since filter files have become more complex (as seen in data that is style rule based such as ESRI, Smallworld, and G/Technology), this tool can be very useful in managing the customizable settings.
Posted by GTViewer - Joey Rogers at 3:58 PM No comments:

http://www10.giscafe.com/nbc/articles/view_article.php?section=CorpNews&articleid=303473
Posted by GTViewer - Joey Rogers at 11:30 AM No comments:

For several years, GTWeb has provided an easy way for a large number of users to access your GIS data with minimal administrative effort. GTWeb has minimal client requirements, requires minimal bandwidth, and is very easy to use. GTWeb version 5.0 provides a significant amount of new features to make it even more effective at what it does best.

Version 5.0 of GTWeb offers a new approach to viewing your GIS data while still providing all of the functionality of the previous versions. The GTWeb Server can now simultaneously support the traditional GTWeb client that has been available since the product was released as well as the GTSketch client introduced in subsequent versions. The exciting new feature offered by Version 5.0 is a new mode of operation that brings GTWeb to an even greater user base by removing the need for any client component at all other than the browser.

The new "client-less" mode uses ASP.NET 2.0 to interact with the GIS data. It allows queries, panning, zooming, and reviewing of attributes just like the original version. The GTWeb and GTSketch clients still provide a richer experience for the user (since they are very similar to GTViewer in regard to its viewing capabilities), but the gain in universality offered by the client-less version opens GTWeb (and your GIS data) up to a new, larger class of users. The client-less mode of operation grants immediate access to users without the need to install or maintain any client software other than the browser, and it provides browser independence since it can be used with IE, FireFox, Opera, etc.

The new features provided in GTWeb version 5.0 are not limited to the new client-less mode. GTWeb has always been delivered with a Template Web Site to use as a starting point for creating your own specific web application around GTWeb for your organization. The Template Site is complete and can be used as-is; generally, if any changes are needed, they are cosmetic (such as adding your company’s logo, etc.). The Template Site delivered with GTWeb version 5.0 has been rewritten to take advantage of many features found in ASP.NET 2.0, and to make the template site easier to use and customize. The new Template Site works with both the client and client-less modes of operation and can easily combine projects of both types. Some of the new Template Site features are listed below:

Another significant new feature provided by GTWeb version 5.0 is that all of the server side functionality is available in the form of a Web Service. A Web Service is a self-describing software component that makes its functionality available over the internet in a platform independent way. A variety of development platforms (such as .NET and Java) can consume a web service and incorporate the web service’s functionality into a web page, a desktop application, a device application, or anything that can use web services. By providing all the functionality of the GTWeb Server component, a new approach to getting your GIS data on the web and into other applications is now available.

The screenshots below show some of the new template site pages and what the client-less maps look like: 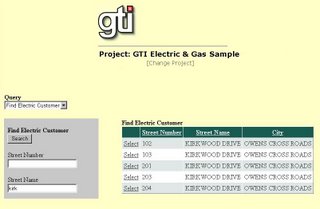 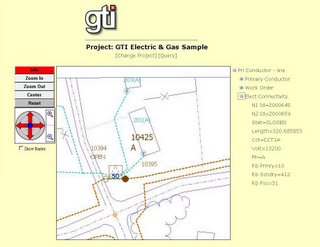 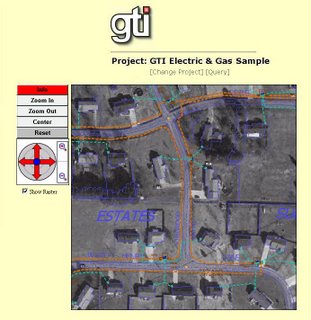 Posted by GTViewer - Joey Rogers at 1:54 AM No comments: