Geometry Info in the GT/Metadata Explorer

With version 1.0.0.34 of the GT/Metadata Explorer, a new feature has been added to the Find Feature tab to show detailed information about feature's geometry. The Find Feature tab already provided commands for Attribute Info, Style Rule Info, Connectivity Search, and Ownership Search for any feature found using an Attribute Query, Find by FID Query, or a Predefined Query. The Geometry Info command finishes off this set of commands for getting detailed information about a feature. 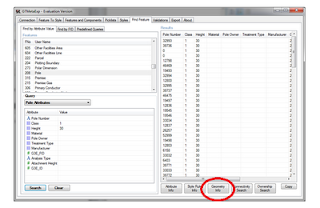 By selecting a feature in the query results and pressing the Geometry Info button, all of Tabular geometry information for each component associated with the selected feature as well as a graphic preview will be shown. The Geometry Info dialog provides a split view with the Preview on the top and the Tabular Information on the bottom. Selecting a row in the tabular data will highlight the associated graphics in the preview area in red. 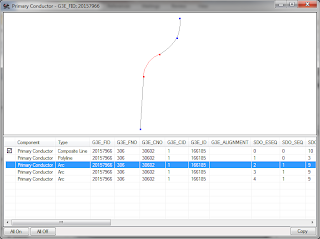 If the tabular row contains a Composite Line, Composite Polygon, or Collection, all of the child records will be highlighted in both the tabular view and the preview. 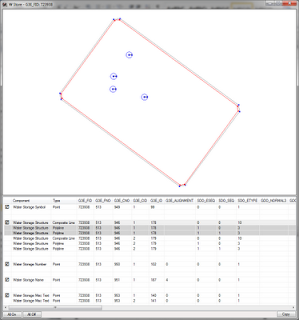 For features with multiple graphic components, all geometries will be shown in the preview. A checkbox appears on the first line of each component in the tabular view. By default, all of the checkboxes will be checked, and all components are shown in the preview. You can click on the checkboxes to hide or show any of the components. The All On and All Off buttons at the bottom left corner of the dialog will check or uncheck all of the components with one click. 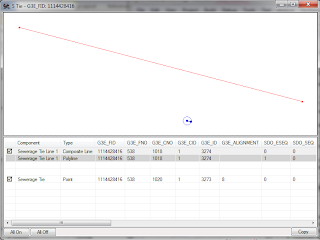 Point geometries (Symbols and Labels) are represented as hollow circles with a smaller point at both the origin and another point showing the orientation of the point.
Posted by GTViewer - Joey Rogers at 11:41 AM No comments:

Coordinate Factors – What are They? How Do You Set Them?

The topic of Coordinate Factors is often raised and until this post there has not been a single good description of what they are and how you should set them. Most users just accept these 6 magic numbers that were provided to them the first time their data was converted and don’t give them another thought. However, if your data changes its coordinate projection, you acquire data from another area, or you simply deal with many different datasets on a regular basis, it may be helpful to have a better understanding of how Coordinate Factors work.

The Coordinate Factors are 6 numeric values defined in the [General Info] section of the .GTM file using the following entries:

The Coordinate Factor values are used to convert Real-World Coordinates (sometimes referred to as Computed Coordinates) to GTViewer’s Internal Coordinates (sometimes referred to as System Coordinates) and vice versa. Real-World Coordinates are coordinates in the data’s native coordinate system, such as State Plane, Latitude/Longitude, UTM, etc. These values are usually double precision floating point numbers. GTViewer’s internal coordinates are stored such that they require less storage space in the graphic files (.gtg) and the spatial index files (.gtn). Instead of storing coordinate values as double precision floating point values (which are 8 bytes each), they are instead stored as an unsigned 32 bit integers (which are 4 bytes each). This change of type brings an immediate 50% saving in the data size; however, the internal coordinate values no longer reflect their real-world positions. To get around this problem, the Coordinate Factors provide the necessary information to restore the internal coordinates to real-world coordinates.

To convert GTViewer internal coordinates back to Real-World coordinates, the above formulas are simply rewritten as:

It may not be obvious how the Coordinate Factors should be set just by looking at the formulas above, but the goal is simple. The coordinate factors are set so that any point in the dataset (Real-World coordinates) will map to a point whose X and Y are both unsigned (positive) 32 bit integer whose range is 0 to 4,294,967,296. There are many ways to figure out what the Coordinate Factors should be to meet this goal, and I will go through the simplest approaches below.

The Coordinate Factor X2 and Y2 are the multipliers (which will scale the data), so they are used to get the precision you need for the GTViewer data. With Latitude/Longitude data, you need around 6 decimal places, so you can set the X2 and Y2 to 1,000,000. Then when the Real-World X or Y is multiplied by the X2 or Y2 Coordinate Factors, you will get 6 of the digits after the decimal place as part of the number. If your data is in Feet or Meters, then can you set the X2 and Y2 to 100 or 1000, which means that you will get precision to 100th or 1000th of a foot or meter.

The Multipliers preserve the precision when the values are converted; however, in the example above, the GTViewerX value is negative. The X1/Y1 and the X3/Y3 Coordinate Factors are the Shift values and come in here to move the data back into the positive space. It is also possible that the GTViewer coordinate values may exceed the 4,294,967,296 maximum after the Multipliers are applied, so the Shift values can also be used to move the data back down into the desired coordinate space.

For the Latitude/Longitude example it is more straight forward to use the X1/Y1 since they are in real-world coordinate units (degrees). We know that Latitude has a range of -90 to +90 and Longitude has a range of -180 to +180. In both cases, there can be negative values, and the X1 and Y1 Coordinate Factors need to account for possible negative values. In a meticulous world, we would simply say that X1=90 and Y1=180, and we would be guaranteed to have positive values before the multipliers are applied and the resulting values would always be positive. In practice, it is good to have a little buffer around the data and to prevent confusion on which Coordinate Factors needs to be 90 and which one needs to be 180, I use 200 for both X1 and Y1. The X3 and Y3 Coordinate factors are not needed and can be set to 0. So, for Latitude and Longitude data, the formulas look like this:

The Converted Coordinates meet the criteria of being between 0 and 4294967296 and we preserve 6 decimal places of precision from the original values. It is a good idea to test the extreme values (lat: -90, long:-180) to ( lat:90 to lon: 190) through the formulas to make sure they still fit in the GTViewer coordinate space, but for brevity I will omit that from this posting.

Since most user data is probably in a State Plane coordinate space or similar, I will go through the process for determining the Coordinate Factors in this case as well. The Real-World Coordinates are generally in Feet or Meters and we typically do not need more than 2 or 3 decimal places for precision, so the X2 and Y2 Coordinate factors can be set to 100 or 1000. If your data range is positive, you may not need an X1/Y2 or X3/Y3 to shift the data. We can mathematically compute the perfect Multipliers and Shift values to maximize the amount of the GTViewer coordinate space, but this extra work usually causes problems in the long run. Just make sure the values are positive and there is a little buffer around the data. It is a good idea to know the approximate range of your dataset in Real-World coordinates. If you have any negative values, then you will have to shift the data into the positive space by setting X1/Y1 to at least the absolute values of the smallest negative value (plus a little more for a buffer). If your highest values after the Multiplies are applied are greater than the 4,294,967,296, then you can set your X1/Y1 or X3/Y3 values to a negative value to brings the values under the limit. This description is vaguer than my description for Latitude/Longitude data, but there are simple tests to see if your Coordinate Factors are good. If you look at the data in GTViewer and the data “wraps” around to the other side, then the data needs to be shifted.

The first example below shows the data with the Coordinate Factors properly set: 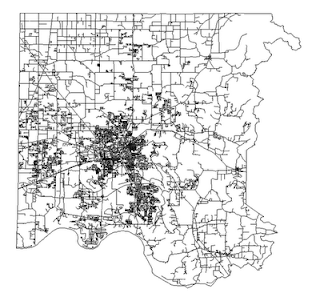 The following example shows data where the coordinates have negative values and the data is wrapping around from the left to the other side of the design plane. The data needs to be shifted to the right, so the X1/Y1 need to be set to higher values. 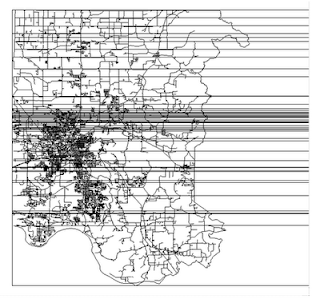 The following example shows where the data has exceeded the 4,294,967,296 maximum and is wrapping around from the right to the other side of the design plane. The data needs to be shifted to the left, so the X1/Y1 need to be set to lower or negative values. 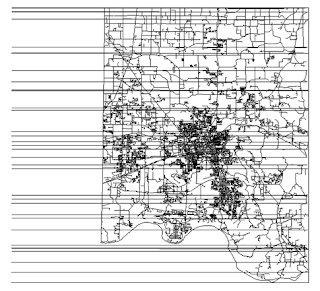 While the X2 and Y2 multipliers are usually not a problem, there is a very specific “look” to the data when the Multiplier are set too low:
Using Coordinate Factors in the GTViewer FME Writer 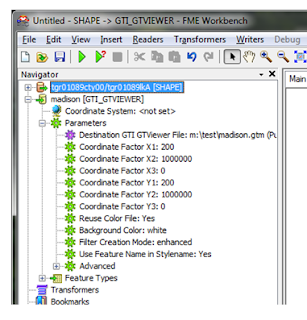 Working with Microstation/IGDS data has a few interesting quirks that can be taken advantage of if you know what to do. A DGN file is also bound by a 32 bit integer Design Plane. However, the Global Origin concept is used to specify where in the Design plane (0,0) occurs allowing negative values to be used. By default, the global origin is in the middle (2147483648,2147483648) which allows the design plane to have a range of something like (-2147483648,-2147483648) to (2147483648,2147483648). The X3/Y3 Coordinate Factors can be set to 2147483648 to compensate for the origin. If the Global Origin is set to a specific location, then Coordinate Factors must reflect this configuration. GTData contains a utility called GTGetOffset that will attempt to get global origin info as well as the UORs per master unit from a DGN File and generate the CoordinateFactor entries for the .GTM file. While this utility is not always correct (depending on the configuration of the data), it can be very useful.

The GTViewer .NET Control for Windows version 9.0.0.8 is Available.

Get Flash to see this player.
http://www10.giscafe.com/video/display_media.php?link_id_display=31478
Posted by GTViewer - Joey Rogers at 11:52 AM No comments: