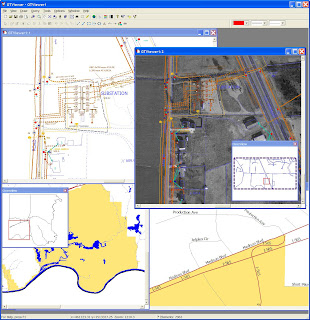 One feature that has been available in GTViewer since the very first version is its Multiple Document/Multiple View environment. This feature is a standard in most Windows applications especially those built around the Document/View architecture. However, only recently has the power of this feature been recognized by its users.

The Multi-View support provides the ability to have multiple views of a dataset; each view can be showing a different location or display different features at common location (such as gas only or electric only). The uses of these aspect of the feature is obvious. The Multi-Document support is a little more subtle in its usefulness. Multi-Document support allows more than one dataset to be opened in GTViewer at the same time; each dataset appears in its own view window (and you can then have multiple view of each dataset). Many users have only one dataset, so the multiple document support may not be useful (maybe). However, for those users who do have multiple datasets this feature can be very useful.

The multi-document feature is especially useful for companies transitioning their GIS. For example, let’s say your GIS uses Intergraph’s classic FRAMME and you are in the process of transitioning to Intergraph’s G/Technology or even an ESRI or Smallworld GIS. GTViewer allows you to use your classic FRAMME data while simultaneously viewing data from your new GIS (just in separate view windows). There are several advantages to having this multi-document support: