Version 1.0.0.31 of the GTViewer FME Plug-In has two new features: (1)an Enhanced Filter Creation mode and (2) an option to automatically prepend the destination feature name to the gti_styleName format attribute.

As users are creating more and more complex feature sets with the FME Plug-in, it has become apparent that the default filter file creation method in the FME Writer Plug-in has become insufficient. By default, filter files have been created for each category using the following simply procedure:

2) add each new filter id (which is tied to the Style Name) as a new component.


This approach is very simple and always works. The user also has the ability to define his or her own more complex filter file definition and the FME plug-in will continue to use the same filter ids as they are defined.

While the GTViewer G/Tech Loader (used to convert Intergraph’s G/Technology data to the GTViewer format) has very little in common with the FME Plug-in, the two applications do have a few conceptual commonalities. Primarily, in both conversion approaches, the Filter Id and the Style Definition are tied together to simplify the conversion process and symbology definition. Therefore, each filter id generated by both conversion methods are mapped to a specific style definition. For example, if you have a Pole feature with a dozen different symbologies, then there will be a dozen different filter ids created in the filter file and each one will be mapped to its own unique style definition. As the different styles are created for a specific feature with the G/Tech Loader, the feature and component numbers of the original feature are taken from the GIS and used to group all of the different styles/filter ids together and form a Group of all the feature’s individual styles. This approach worked so well that GTQuery was modified to accept a Feature and Component number list in addition to a filter id list when defining a query. Now, only the original G/Tech feature and component number are needed to identify a feature in the query definition instead of trying to determine all of the individual filter ids that were used to specify the individual feature’s styles. This approach overcomes the problem of new filter ids being introduced as new styles are used by the GIS; all filter id with a common Feature number are automatically treated as a single feature.

The new Enhanced Filter Creation Mode in the FME Plug-in mimics much of the G/Tech Loader’s approach to filter id so that it can provide richer filter file creation. The original GIS feature and component number may or may not be available to FME; however, the FME Plug-in can still operate in similar fashion by generating its own feature and component number based on the Feature name and Style names used in the conversion. In FME, the Feature name is the name you define on the Destination features (as Feature Type Name).

In the example below, the Streets destination is shown: 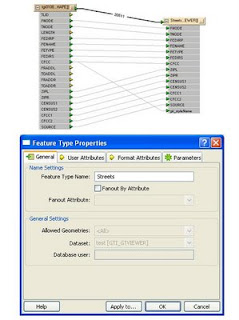 With the Enhanced Filter Creation mode:
In the example shown above, the gti_styleName format property is assigned the value of the CFCC value (which is the type of road and makes it possible to assign each different road type a different symbology).

The second new feature in the FME Plug-In is the ability to automatically prepend the Feature name to the value assigned to the gti_styleName format property. In the past, it was necessary to use a Concatenator to generate the appropriate string for gti_styleName: 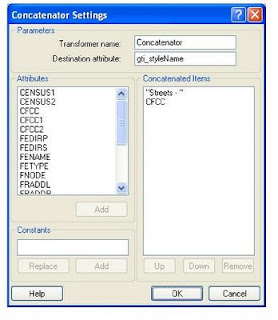 While using the Concatenator transformer is not difficult, it did require defining the concatenation for each feature using attribute driven symbology. When using a single attribute to drive symbology, this task becomes implicit; you just connect the driving attribute to the gti_styleName property in the destination. With the Use Feature in StyleName option active, the Destination feature name and a hyphen (“ – “) are automatically prepended to the gti_styleName value when creating the filter name.


In previous versions of the plug-in, you needed something like this: 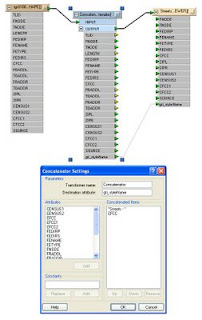 However, with the Use Feature Name in StyleName active, you only need to connect the symbology driving attribute to the gti_styleName format attribute: 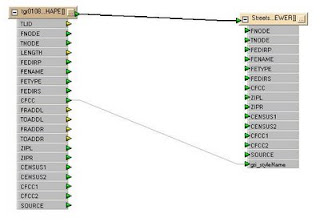 You will still need to use a Concatenator if you want to use multiple attributes multiple attribute to drive the symbology, but the Concatenator’s specification will still be simplified since it does not need to specify the Feature name.
The Use Feature in StyleName is not required and if you wish to use the explicit approach used by previous versions of the plug-in, simply turn this option off in the Destination parameters. 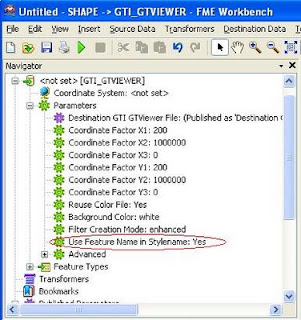 Using the new feature with exsting Workspaces
If you are using workspaces created with previous versions of the plug-in, the new options will not appear in the Parameters section in the Workbench Navigator. However, you can use the gtiParameters.txt file to define these options:
UseFeatureNameInStyleName=1 or 0
FilterCreationMode=enhanced or standard

To use the gtiParameter.txt file, create a file with the desired entries and place this file in the output directory. The FME plug-in will look for this file each time the data is converted. If the file is present, the plug-in will use any settings it may define.
Examples:
To get a better idea of the effect these new features will have on a filter file created by FME, I will walk through an example of the new setting combinations and show the filter file created for each:
File Creation Mode: Standard Use Feature Name in Stylename: No 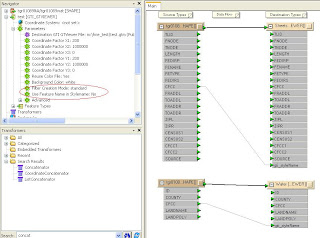 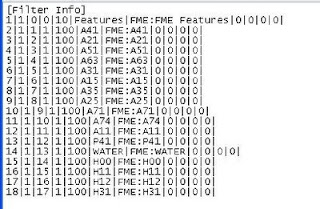 This example produces the same output as all previous versions of the FME Plug-in: one group called Features, with each different gti_styleName value added as a different component. 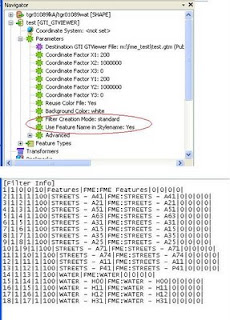 With the Use Feature Name in StyleName set to yes, the Destination feature name is automatically prepended to the style name (“STREETS – “ in this example).

File Creation Mode: Enhanced Use Feature Name in Stylename: No 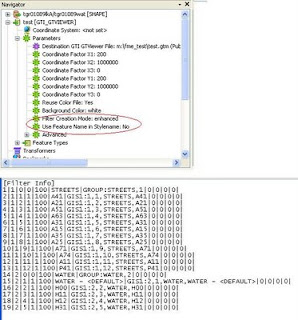 With the Filter Creation Mode set to Enhanced, this version of the filter file is somewhat different from the previous two examples. Two groups are created, one for “Streets” and one for “Water”. All of the street types and water type are created as separate components within each feature group. The “GIS1:” tag and “Group:” tag are used in the description fields instead of the “FME:” tag used by the standard mode. This difference helps the FME plug-in manage the different mode of filter creation and also is supported by GTQuery to allow feature and component specifications. 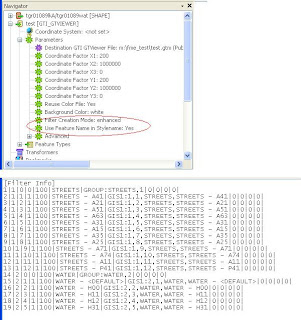 This final example shows the filter file with both the Enhanced Filter Creation Mode and the Use Feature Name in Stylename option active. In addition to the information discussed in the previous example, a few other items of interest are worth pointing out. With the Enhanced mode, the unique Feature numbers that are generated (1 and 2 in this example) which is the second item in each record. Also, the component numbers (the 3rd item in each record) are now unique for each group. The Water group also demonstrates the