GTViewer and GTVx both support the drawing of Dimension Elements. These elements are exactly what you might imagine; they show a length and a reference line to help clarify dimensionality. The example below shows two dimension elements: 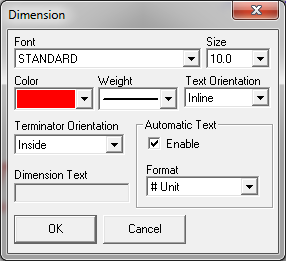 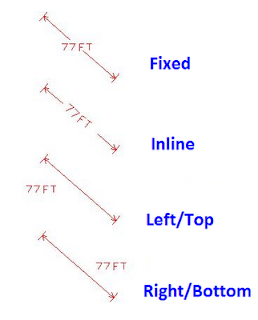 The Terminator Orientation specifies how the arrow heads on the end of the reference line will appear. There are currently 6 different options:

The Dimension Element properties can be changed after placement by selecting the element and pressing the Properties button on the Redline Toolbar. Several Keys can also be used to adjust the appearance of a Dimension element if it is selected:

If using the Automatic Text mode, the Text will be fixed after the placement, so that you can adjust the reference line without changing the text. If you do want to recomputed the text, just select the Properties and check the Automatic Text button and say OK. This action will update the text to the new computed length.

The Automatic Text mode’s Unit comes from the Master unit defined for the data and the Format droplist on the Dimension Element Dialog box can be used to specify how many numbers appear after the decimal point.