The GTViewer Outage Analysis Application is one of the more interesting applications built on top of GTViewer. This posting will cover some of the functionality it offers to give a good idea of just what kind of power the GTViewer and its family of products can provide. As mention before, GTViewer is far more than a viewer and applications like Outage Analysis illustrate why.

The GTViewer Outage Analysis Application provides several different facets of functionality that all work together to provide the best tool for analyzing outage information. There are three major parts to the application:

The Upstream/Downstream Search is identical to the functionality found in the GTViewer Upstream/Downstream Trace application. The user can select a conductor segment to start from and the electric network is traced to determine all of the upstream items (along the path to the breaker) and all of the downstream items (along the path away from the breaker). The user can also interactively modify the open status of switches and fuses to dynamically reconfigure the electric network and immediately see what impact it has on the network. The Outage Analysis will also respect these modified devices giving the user a great deal of control over the data.

The Outage Analysis Console is shown below. This console contains a lot of controls and panes, but it is designed to provide all of the tools needed for outage analysis in one small area: 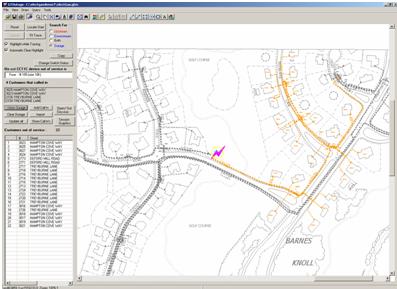 To get a good idea of what the GTViewer Outage Analysis Application does, I am going to go through the process of interactively selecting outages and showing the results. Remember, the Batch Mode is also available for processing a large number of outage calls at once. The Interactive Mode allows a user to select outage locations and immediately see the results of the outage analysis.

For the first example, two customers are specified as having an outage:

The Outage Analysis Application takes the two customers and performs the necessary analysis to determine what the probable cause of the outage is based on the available information. Both of these customers share a common service transformer which has been determined to be the probable cause. In the screenshot below, the outage calls are shown with Magenta circles, the probable cause is shown in Cyan, and all potentially affect customers are highlighted in Red. The Lightning Bolt symbol indicates the location of the potential problem. The lightning bolt symbol and outage symbols are also Data Monitor Items which will be discussed later. 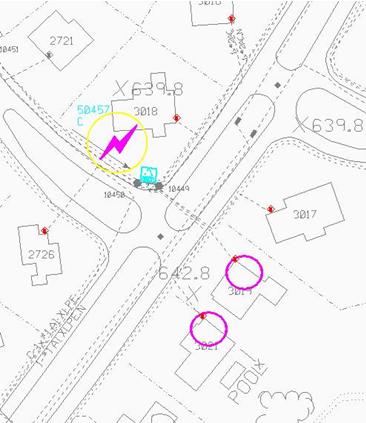 The Outage Console also shows information about the current analysis. The top line in the screenshot below tells the Circuit the device is on and the type of facility identified as the potential problem. The bottom pane shows a list of all customers that would be affected if this device is the failure point. Clicking on one of the customers will locate on that particular address in the view. 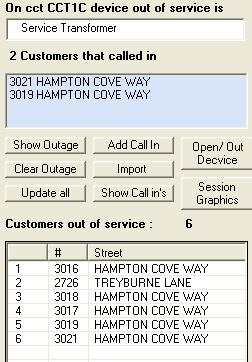 The first example was pretty trivial since both customer were connected to a common transformer. To demonstrate the capabilities of the Outage Analysis application, we have to continue adding outage calls and see how it responds. In the next screenshot, another call is added at:

The analysis performs the necessary traces to determine the probable failure is fuse #105 located upstream of all three outage calls. The screenshot also shows all of the conductor affect in Orange.

The Outage Console now shows 22 customers that would be out if the identified device has failed.

By adding one more outage call at:

The Outage Analysis app again traces the network to find a potential device that would affect all four addresses if it had failed. 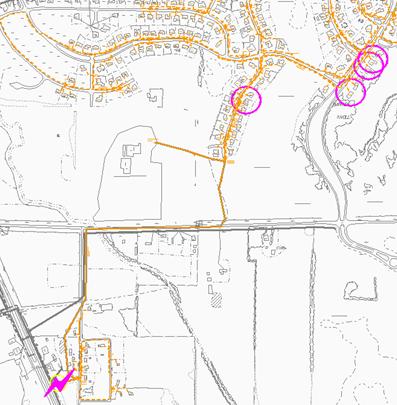 In this example, a Fuse near the substation is identified as the potential failure point which would affect 154 customers if it has failed. Again, the circuit affected is shown in Orange.

The above example shows only one circuit outage; however, this application is designed around the GT/Trace component and performs the tracing it needs for its analysis very quickly and give this application a great deal of scalability. When multiple outages are present with many customer calls, the Data Monitor makes it easy to see what is going on in the entire system. Data Monitor items are used for both the outage location and customer call, and a Data Monitor item’s tooltip is displayed when the cursor hovers over the item to show detailed information as shown below: 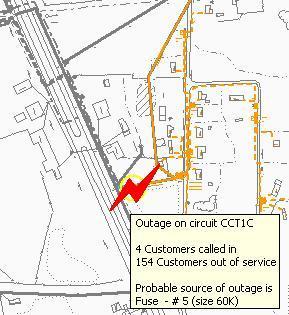 This posting just grazes the surface of what the GTViewer Outage Analysis Application does, but hopefully it gives an idea of the complexity applications written on top of GTViewer or GTVx can provide.