Loop Makeup is a task performed on telephone networks to identify various characteristics of a line as it goes back to the CO (central office). Loop Makeup reports are used for a variety of decision making tasks such as qualifying a customer for DSL service, finding bridge taps, determining loading, etc. By providing this detailed information in the field or in the office, GTViewer’s Loop Makeup Application improves productivity and gets the right information to the right people, when it is needed.

The Loop Makeup Application is shown below: 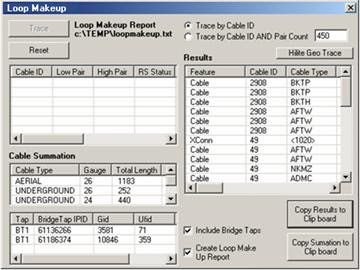 When activated, the Loop Makeup Application waits for the user to select a starting feature. The feature can be a terminal, a cable, etc. Since a feature generally has more than one pair of wires running through it, the user is presented with a list of all Cable Id and Pair ranges for the selected feature. The user then picks a Cable Id alone or a Cable Id and Pair Count to create a loop makeup report for and the network trace begins. By utilizing the GT/Trace component, the telephone network is traced very quickly from the selected feature back to the CO. As the trace progresses, the data for the report is accumulated and several options are made available to the user, such as Trace by Cable Id or Trace By Cable Id and Pair Count with a specified pair count value. The user can also specify to Include Bridge Taps and to Create a Loop Makeup Report file.

The Results pane in the Loop Makeup app shows each feature traversed on the way back to the CO. These features can be in the regular geographic view and/or in a detail drawing since the trace goes through all connected feature and usually there are some in detail drawings. Clicking on one of the items in the results will locate on that item in the view.

The Cable Summation pane shows a summary list of lengths for each cable type/gauge pair. A list of Bridge Taps is also provided if the Include Bridge Taps options were selected.

Both the Trace Results and Summary Information can be copied to the Windows clipboard with the Copy Results to Clipboard and Copy Summary to Clipboard buttons. These results can be pasted in to Excel or any other application.

If the Create a Loop Makeup Report option was selected, a formatted file is written to disk with all of the Loop Makeup information included. This report looks like the following screenshot; however, its appearance can be customized. 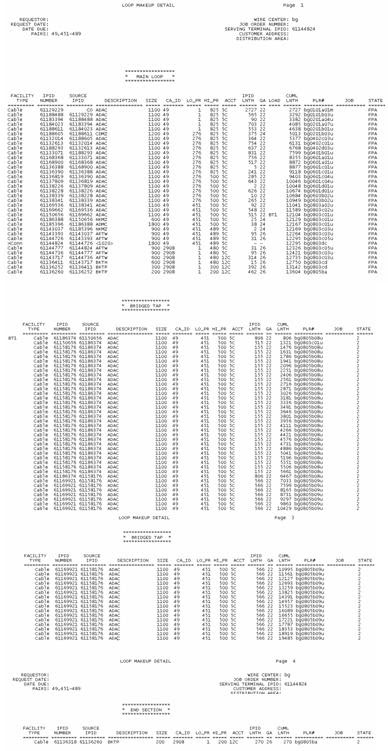 The Loop Makeup results are also shown graphics in the geographic view by highlighting the path taken back to the CO. Unlike network tracing seen with Gas and Electric models, it is not obvious which path a pair takes just by looking at map. A cable can contain hundreds of pairs and a pair can jump around through different cables, so a visual path drawn on the map can be more valuable than it might first appear: 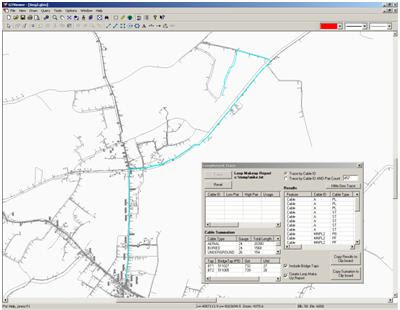 The GTViewer Loop Makeup Application is an excellent example of a complex GIS task GTViewer can provide users in the field as well as users in the office.
Posted by GTViewer - Joey Rogers at 2:11 PM