GTViewer’s Tracing capability works for many different kinds of data. For Intergraph data (Framme or G/Technology), the database table storing connectivity information is used. For Smallworld and ESRI data where connectivity is stored as coincident graphics, GTViewer’s spatial indexing mechanism blazes through the graphics to find connected features. GTViewer’s tracing capabilities are augmented by GT/Trace which is a development tool that encapsulates all of the commonalities found in network tracing. GT/Trace accelerates the development of network tracing application and maintains a solid and well tested framework for network Tracing applications.

Running the Upstream/Downstream Trace is as simple as picking it from the menu in GTViewer. You will immediately see the dialog shown below: 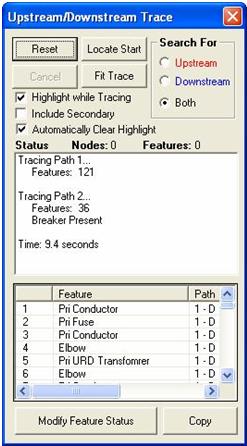 The Upstream/Downstream Trace’s dialog has several buttons and options at the top. The Reset button will clear any previous trace information and put GTViewer back into select starting feature mode. The Cancel button will stop a trace if it has already begun; this button is disabled if a trace is not actually running. The Locate Start button is provided to find the trace’s starting feature. Since the trace results are fit when the trace is completed, it is sometimes useful to easily and quickly go back to the starting feature. The Fit Trace button is provided to fit the trace results at any time. If you zoomed into look at features in the trace results more closely, or used the Locate Start button, the Fit Trace button will immediately fit the entire trace’s results into the current view.

Several options are also available to govern how the trace is run. The Search For group of options allows the search to run in three different modes: Upstream, Downstream, or Both. While this is an Upstream/Downstream Trace, the user may only be interested in the Upstream features or the Downstream features. If this is the case, the time needed to trace in both directions is sometimes not necessary. If the network does not support some form of directionality in its connectivity data, the trace will have to search to find the breaker at the substation to know which direction is upstream, so if the direction traced first is not the desired direction (when only upstream or downstream is selected), the trace will have to search in the other direction as well. Fortunately, the GTViewer’s tracing process is very fast and the selection of just Upstream or just Downstream is more for configuring the Trace results than increasing performance.Three more trace options are also provided as checkboxes:

The following screenshots show a sample trace. The first screenshot has the raster backdrop turned on and the second one is shown against the overview graphics. In both screenshots, the following rules apply: 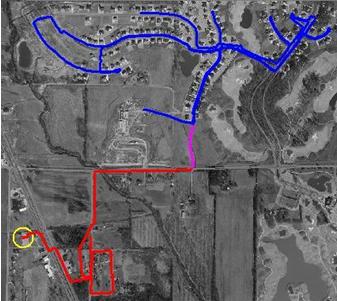 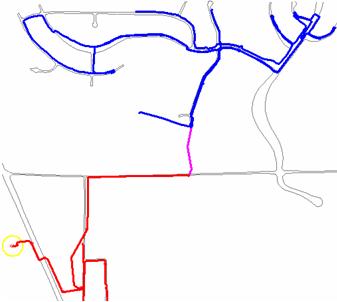 The Emphasize Session Graphics mode is automatically turned on when a trace is completed so that the Trace results are clearly visible against the rest of the data. If we zoom in to the area around the breaker (), you can still see the trace results very clearly against the grayed out features. 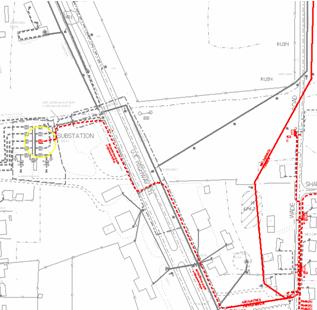 The Upstream/Downstream Trace Dialog also shows a status window to indicate what is going on with the trace. When the trace is successful, it shows how many features are in each path, the path where the breaker was found, and the time it took to perform the trace. If there were errors or if the trace were canceled, the status window would also show this information. The Feature and Node labels at the top of the status window give you an indication of how the trace is progressing. The Feature count is the number of features traced. The Node count is the number of unprocessed nodes; this number will go up and down as the tracing progresses. As the trace nears completion, the Node count will go to zero and the trace will stop (as there are no more nodes to trace).

The Output list at the bottom of the Upstream/Downstream Trace Dialog shows a list of all features traced. This information includes the order of the features as they are traced, the trace path they belong to (upstream or downstream), the name of the feature, and the feature’s keys. The results can also be copied to the Windows clipboard with the Copy button; these result can be pasted into Excel to make a report.. Also, if you click on one of the items in the list,
it will be located immediately in the view. See the following screenshots for an example. 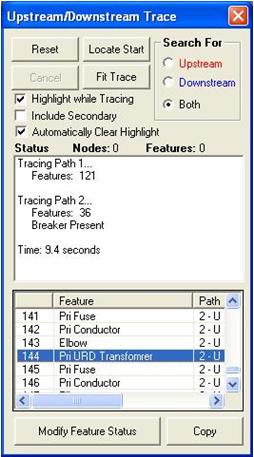 To be continued in Part 2.

hi Joey Rogers , u seem knew a lot about gtech.

can we chat over Yahoo messenger or MSN

thank you very much