While most GIS datasets have some form of street network as part of their landbase, this data generally does not contain enough information to provide turn-by-turn directions for getting from one location to another on a map. For example, let’s look at TIGER data which is freely available from the US Census Bureau. While this data does provide street information containing street segments with address ranges, it does not capture the intricacies of the street topology (how the streets are connected together). One way streets, overpasses, and underpasses are just a few of the factors complicating the process of knowing which routes are possible to travel when going from one location to another. More sophisticated street network data is required to perform useful point to point street routing, and while many GIS datasets do not have this quality of street data now, it can be purchased (Tele Atlas’ Dynamap Transportation for example) or available from other parts of the business that may be using the street network data for other applications.

GTI has provided GT/Trace for several years as a tool to simplify the process of tracing electric, gas, water, fiber, and telephone networks. GT/Trace abstracts the commonalities found in all of these network traces and encapsulates the functionality in a well tested, optimized component that greatly speeds and simplifies the implementation of tracing applications. However, tracing street networks is slightly different than tracing a facility network. You may still be traversing from point A to point B, but the rules governing the traces are somewhat different and the size of a street network can be significantly larger than a facility network. GT/Trace has been enhanced to provide additional functionality specifically suited to street networks. The ability to quickly perform a cost based (shortest distance or shortest time traveled) search of a very large network has been added while still maintaining the standardized approach to network tracing that GT/Trace already provided.

GTViewer and GTVx can both take advantage of the new functionality in GT/Trace and provide Point to Point Street Routing functionality if your street network data meets the requirements necessary to support it. Previously, we have recommended our MapPoint integration with GTViewer to accomplish this task, but as more and more of our customers are acquiring high quality street network data, it is natural for the routing to be done within GTViewer or GTVx. 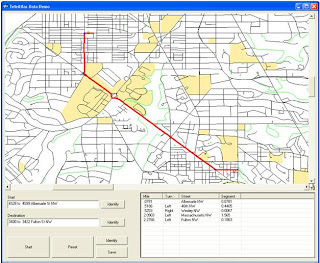