An Implementation of the Graham Scan in VB.NET (2008) within a GTVx Application that Lists the Streets Near a Circuit

This article has two audiences:

The Most Relevant Code for the Graham Scan

The VB.NET Project in a Zip File

Discussion of the code

Practical results in GTViewer – What Problem is Solved?

This section is primarily intended for the audience of GTVx application developers.

We get questions from our users. If we are lucky. And if we are very lucky indeed, we get interesting questions. The application above rose from one: “Hey Charlie, is there any way to tell what streets are near a circuit?” “Probably, tell me more.” “Well, the dispatch department keeps a bunch of facts about each circuit. A map. The substation name. More stuff. And a list of the streets that are close to it. They look on a printed map and copy down the street names. Sure would be nice to do automatically.”

One of the most fortunate things that happens to GTVx application developers is that we can ask Joey Rogers how it would be most appropriate to approach a problem. In this case, he pointed me to the Graham Scan and a few web sites that describe it. And scanned a chapter of a textbook about the Graham Scan. From these, I was able to develop the code in the zip file. I think anyone who has worked for more than a few days with GTVx will recognize the techniques used in the project. Almost all of them come directly from code examples in the GTVx documentation.

Here’s a sketch of the approach: It’s pretty straightforward to use a query to get all the primary conductors on a circuit. Then it’s easy to get all their vertices. That is the point set processed by the two-step Graham Scan. Once you have an ordered list of points describing the convex hull, you can use that list to place a redline shape. Then you can count all the street features within the shape and use the CountDetails method to make a list of street names. Then you sort them and place them in a Listbox. Once all the circuits have been processed, you can write the Listbox contents to a text file. Done.

Not perfect. The convex hull surrounding a circuit may contain streets that are not very close to any conductor on that circuit. So the list of streets produced by the application is in practical terms a superset of street names from which inappropriate street names will need to be removed. I suspect this will turn out to be a manual task. But it makes producing the final lists of streets much simpler than starting with a map and a pencil. 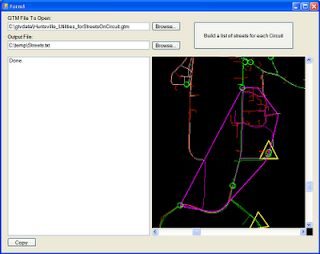 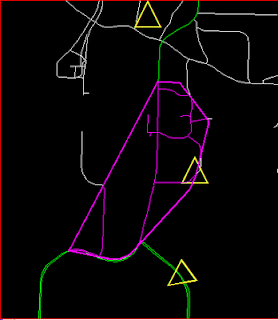 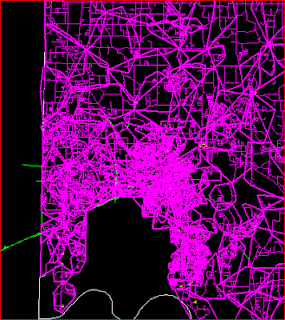 I use a PL/SQL Graham Scan from our OMS to create the shapes for our outage map. It's a lot easier with a database table of points, since you can do all the sorting ahead of time with your query.

Thanks, Nick. Just for us SQL illiterates, how do you sort a set of points by polar coordinate (or by some proxy arithmetic like I did in the project)? Does PL/SQL let you define a comparer function?

You're turning into quite the bit-twiddler!