The released version of the GT/Metadata Explorer has a new feature not seen in the beta versions. On the Find Feature tab, you can query any feature in the GIS by selecting the feature type and providing attribute value criteria, specifying a feature’s FID, or performing a query defined in the metadata. Beta versions provided the user with the ability to show Attribute Info, to perform a Connectivity Search, and to perform an Ownership search. The released version provides a new Style Rule Info command which will display all style rules associated with the selected feature, indicate which rules are triggered by the selected feature’s attributes values, and provide a detailed explanation as to why a style rule is selected or rejected.

In the example below, a Guy query is performed with several Guy features resulting in the result list. A specific Guy is selected in the results to enable the Attribute Info, Style Rule Info, Connectivity Search, and Ownership Search commands. 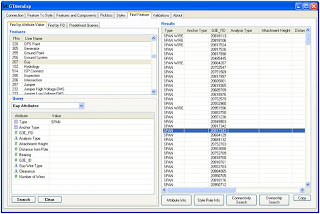 If the Style Rule Info button is pressed, the following form is displayed showing all of the style rules associated with the selected Guy feature. The Style Rules are evaluated to determine which style rule will be triggered based on the selected feature’s attribute values. The trigger rule is highlighted in Yellow: 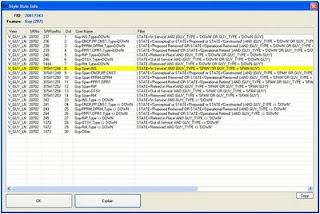 If the triggered style rule is selected and the Explain button is pressed, the following form is displayed: 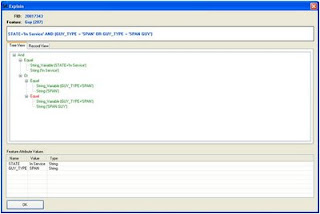 This form shows a decomposition of the selected style rule in a tree view. At the bottom of the form, a list of the selected feature’s attributes is presented along with the associated values and types. In the example above, the Style Rule is:

The selected feature’s STATE attribute is set to ‘In Service’ and the GUY_TYPE is set to ‘SPAN’. The style rule is decomposed into 3 clauses:

Each clause is evaluated to show if it is True (green) or False (red).

The two GUY_TYPE clauses are then OR’ed together, one is TRUE and one is FALSE, so the resulting value is TRUE.

The STATE clause is evaluated to TRUE and AND’ed with the result of the two GUY_TYPE clauses being OR’ed together, and is also TRUE.

The final result (top of the tree) is TRUE and is why the Style Rule is triggered.

A Record View of the Explanation is also available. While the information provided is the same as that shown in the Tree View, the Record View provides a slightly different perspective. 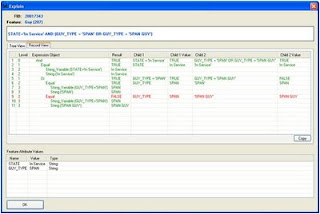 We can also select rejected Style Rule as shown in the following example: 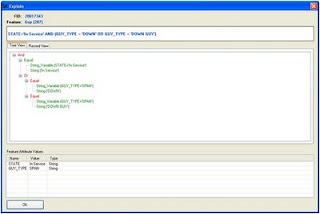 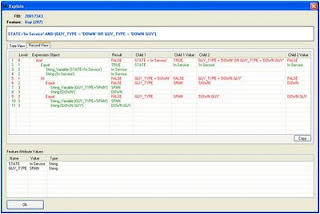